Lesson One: Identify and Develop Your Gifts Immediately

Our mother has been very involved with yoga, exercise, meditation, and walking these past several weeks, in an attempt to heal her knee and avoid a “damntotalkneereplacement” surgery. This morning, I had to run behind the couch to laugh quite uncontrollably, as her yoga contortions had resulted in such a ball of limbs I doubted she would extricate herself by nightfall. Apparently, there exists a Complete Knot Asana.

At any rate, I regained control of myself and emerged from my chuckling interlude to ask her if I might help her out by writing a post for the edification of dogs everywhere. I took her grunted responses to be in the affirmative, so I’ve put together some tips from the larger manuscript I’m writing. It’s called, The Training and Management of Humans, and is especially directed towards those living in a multi-canine (or cat) household, although Only Dogs may also benefit, of course. (Usually, they are so spoiled that no further advice is needed.)

My 4-legged friends: Let me be exceedingly perspicuous: This work begins as soon as humans get hold of you. Do NOT waste your brief puppyhood drooling and sleeping, for this is the most important–dare I say crucial–time for eliciting and maintaining the upper paw with your humans. This is the when you must (quickly) learn about your gifts and powers to charm your humans, rendering them in comfortable and happy obedience forever. An obedient human is content and secure; we owe them this.

Here, you see how I let my own heavenly puppy smell and tummy splutch so captivate my mother that I went from being a “foster dog” to her very own adopted Gracie in about 3 days flat. Work it, my friends; find your gift and work it. Mine is clearly Adorableness. It has worked to my advantage from the start, and continues, into my third year of mastery. You will notice that sometimes I play off my siblings’ age and lesser adorableness to more starkly contrast my own dearness. This is a technique I learned early and well, and should be considered by all who are the youngest in the pack. 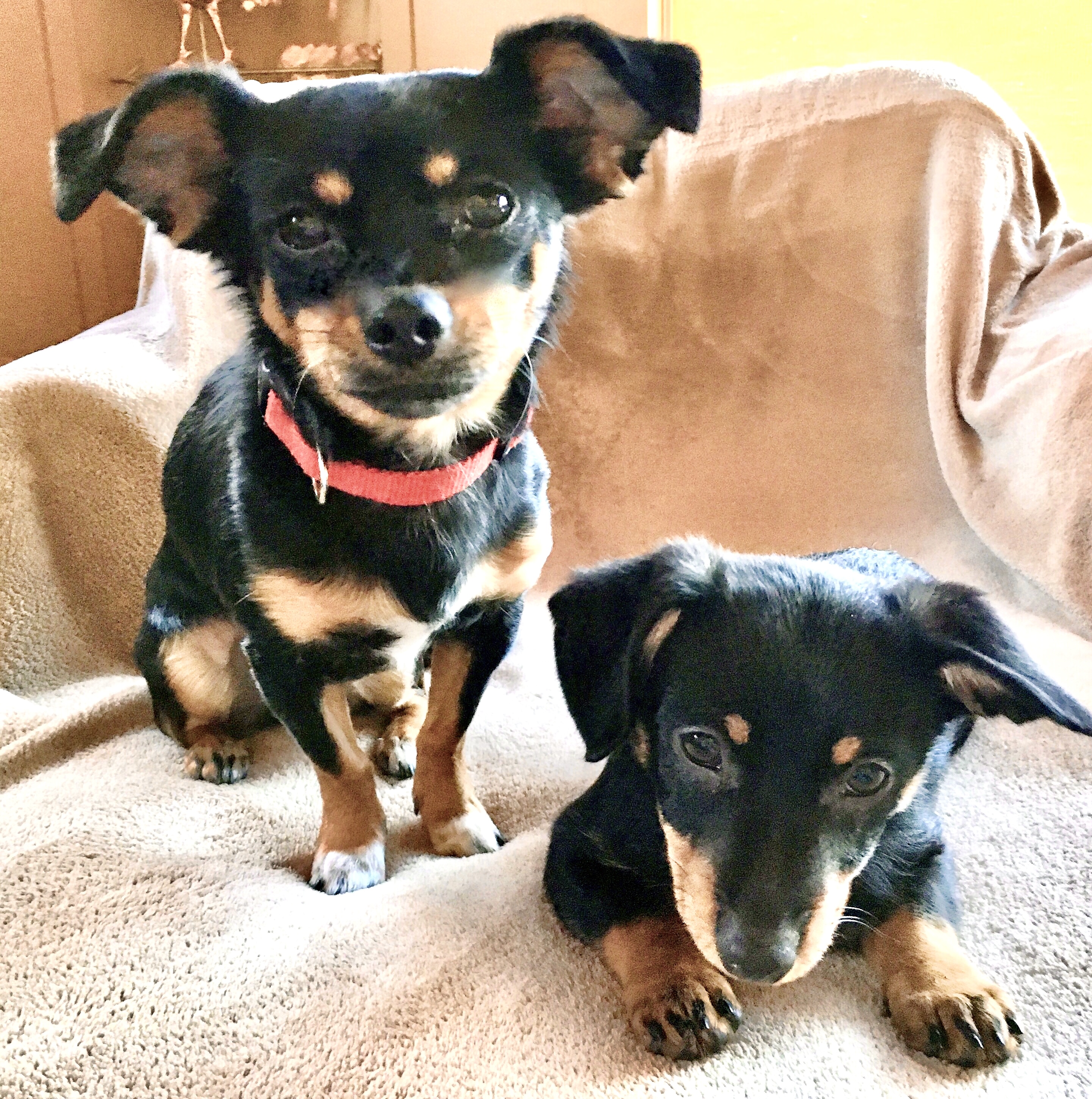 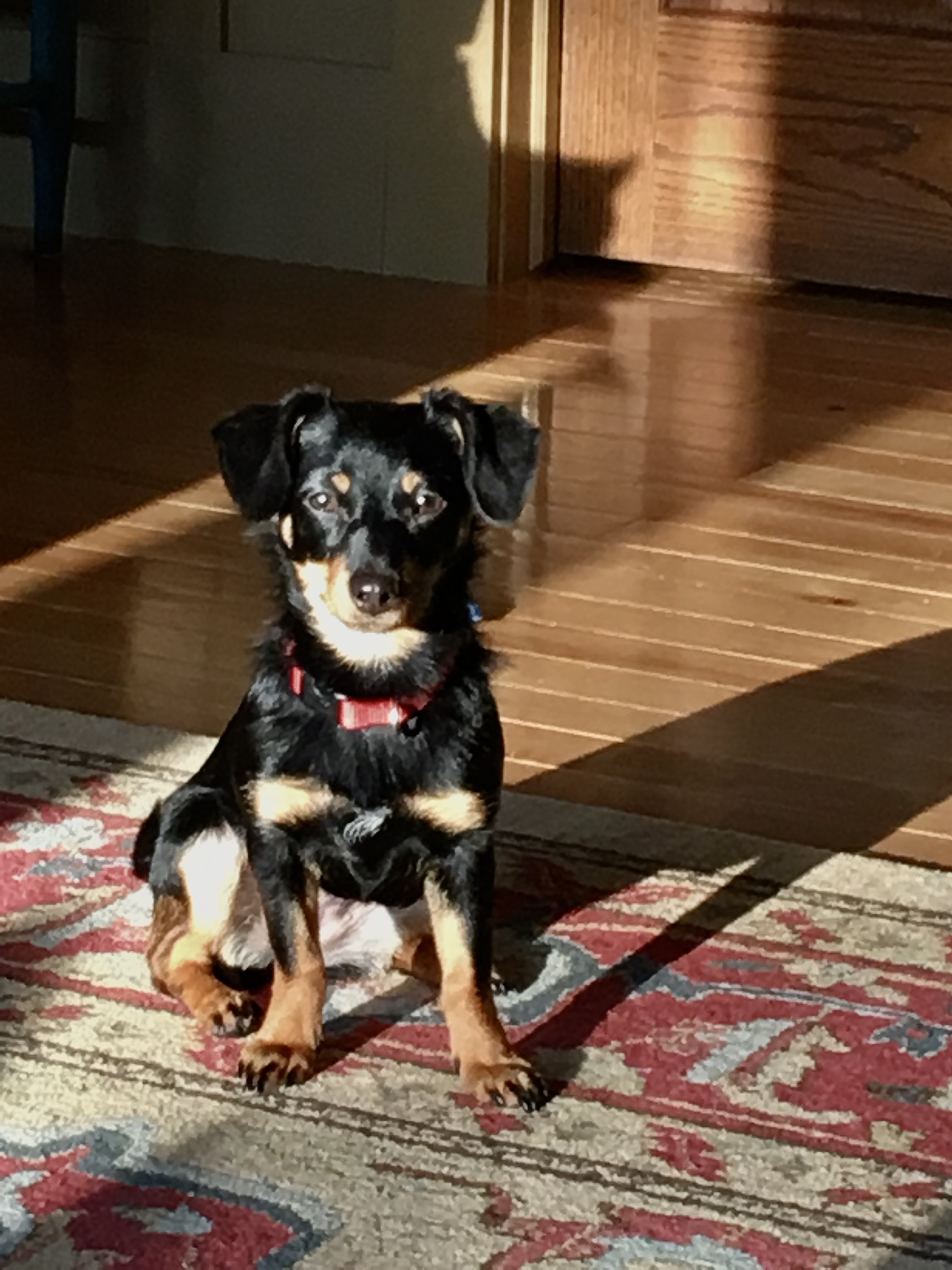 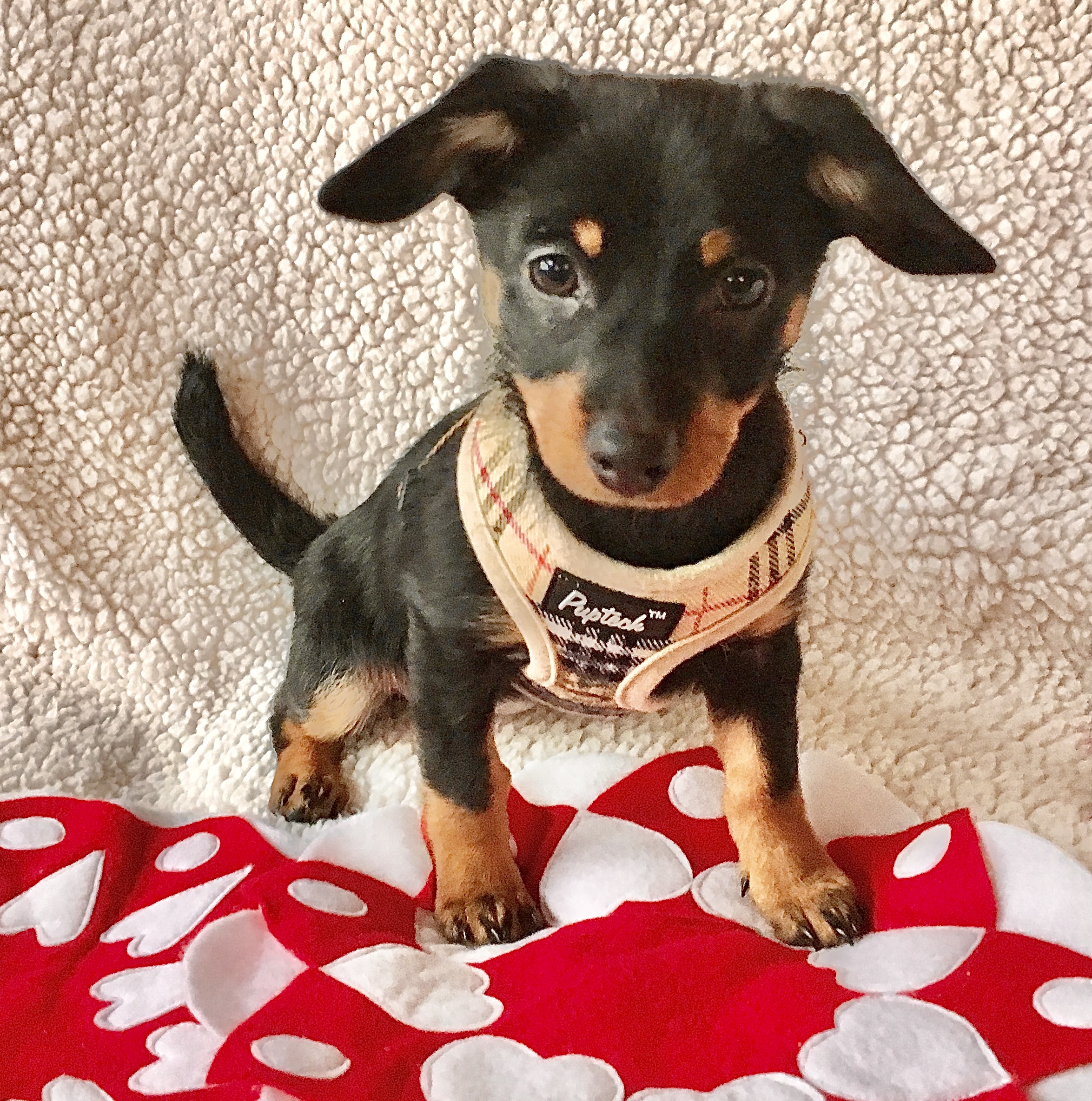 I must also add that as a puppy, I developed the unique trait of using my ears to further mark me as Adorable and (seemingly, haha) dependent…look for the ways you might do this as well. Beguile your humans early and you won’t regret the riches this will yield.

Micky’s puppy gifts, I’m told, were both his resemblance to something called Yoda, and his puppy Inscrutability, a trait he has perfected and still uses to great effect with our humans on a daily basis. He says it confounds them, which weakens their resolve to do anything but ply him with treats. You’ll notice in the last photo how his Inscrutability so well serves him in adulthood: the human hand extends to tickle him; he does not react. This makes the humans work harder to serve us. They desire a playful, jumpy response. It gives them power. I say, “Withhold, like Micky, and remain in control, my friends.”

Micky also has a unique posture that endears him to humans everywhere. Although he is the middle pup, I will say his special gift is retaining some of his neonatal charm, as seen here, although he hasn’t developed the intelligence (not to put too fine a point on it) to know when to stop whining like an infant and just switch into this pose when he wishes for a specific behavior from the humans.

Malarky, usually called Larky, is my eldest sibling, and  he has an array of strange gifts that, from the first, befuddled, amused, and captivated our humans, rendering them putty in his paws. For example, he loved to eat tall grasses from mother’s gardens and expected her to sit beside him on the lawn, not too closely, but precisely within one and one-half feet, while he munched like a donkey on straw. Then, he would indicate with a nod and soft bark that he desired her to harvest more. This bonded her in servitude to Larky forever, so far as the rest of us can judge. He needs but to indicate a yearning and mother hops to it with all the energy and blind obedience of, say, an orchestra to its conductor. (Mother forbade me from using political references as similes and metaphors, and, since this is my first post, I will follow her guidance. Another trick in training humans: Follow directions the first time. Lull them into thinking a pattern has been formed.)

Larky also developed a snarky side-eye glance at a very young age, that stopped mother and father in their tracks and made them doubt themselves and feel foolish, a precarious stance which Malarky used to his great advantage.

You can see how he still commands attention and–preferably–subservience, as an adult, Indeed, we bow before his mastery. Mother and father know better than to cross him when these looks are delivered. Training accomplished!

We come next to Dooley, and I confess, we are at a loss, for his first year was a Dickensian tragedy on the streets of Houston, the hellish place for dogs that most of us are from, regrettably. (We thank heaven for the rescue angels who also reside there. And here.) But that is his almost enviable gift, as well, for the sadness of his first year did not dim but burnished his sweetness. He can do no wrong in the eyes of our humans. Here, for instance, is how he responded to the “no sitting on the furniture” rule:

Father and mother’s response is to sigh and say, “Isn’t he cute?” He is most authentically the Trainer of our humans because there is no artifice. He’s just Dooley and gets his way all the time. 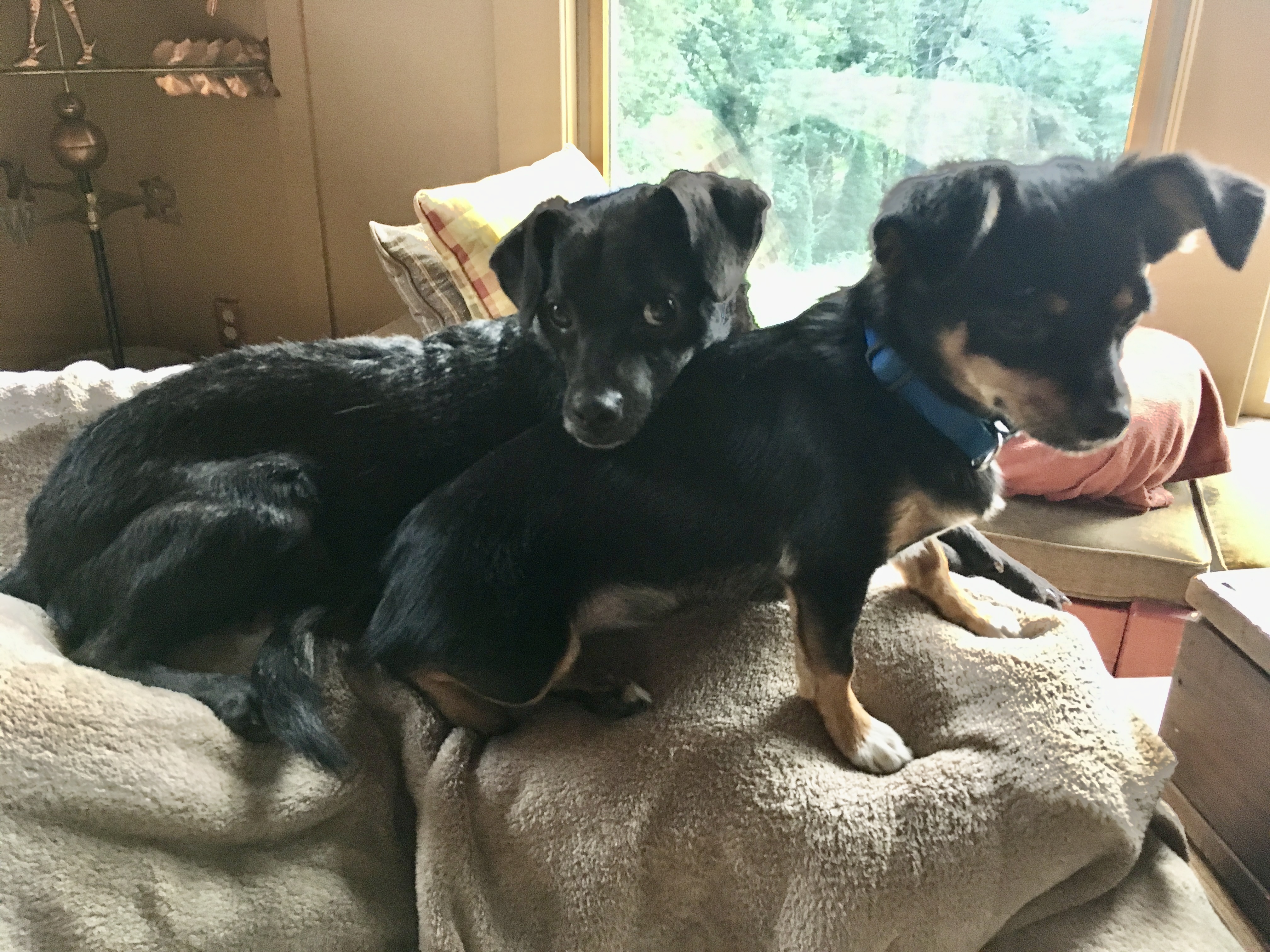 And now we come to my sister, Teagan, probably the keenest manipulator in all of the canine kin-dom, for she is mistress of our humans’ unconscious and has used this to her–and, I must admit, all of our–advantage since she arrived, a most-desired little girl by our mother. As a puppy she drove mother to distraction by resisting contact and touch for two weeks’ running. Finally, when mother was without hope, Teagan slyly crept into her arms, a trophy-worthy capitulation if ever there were one. Perfect timing, Teagan! I would say her native cunning Cleverness coupled with my Adorableness (and, of course, the boys’ gifts) have made us invincible in terms of running this show. (Notice her daring response to the furniture verboten was to drape herself over the arm of the couch or chaise. Too clever! 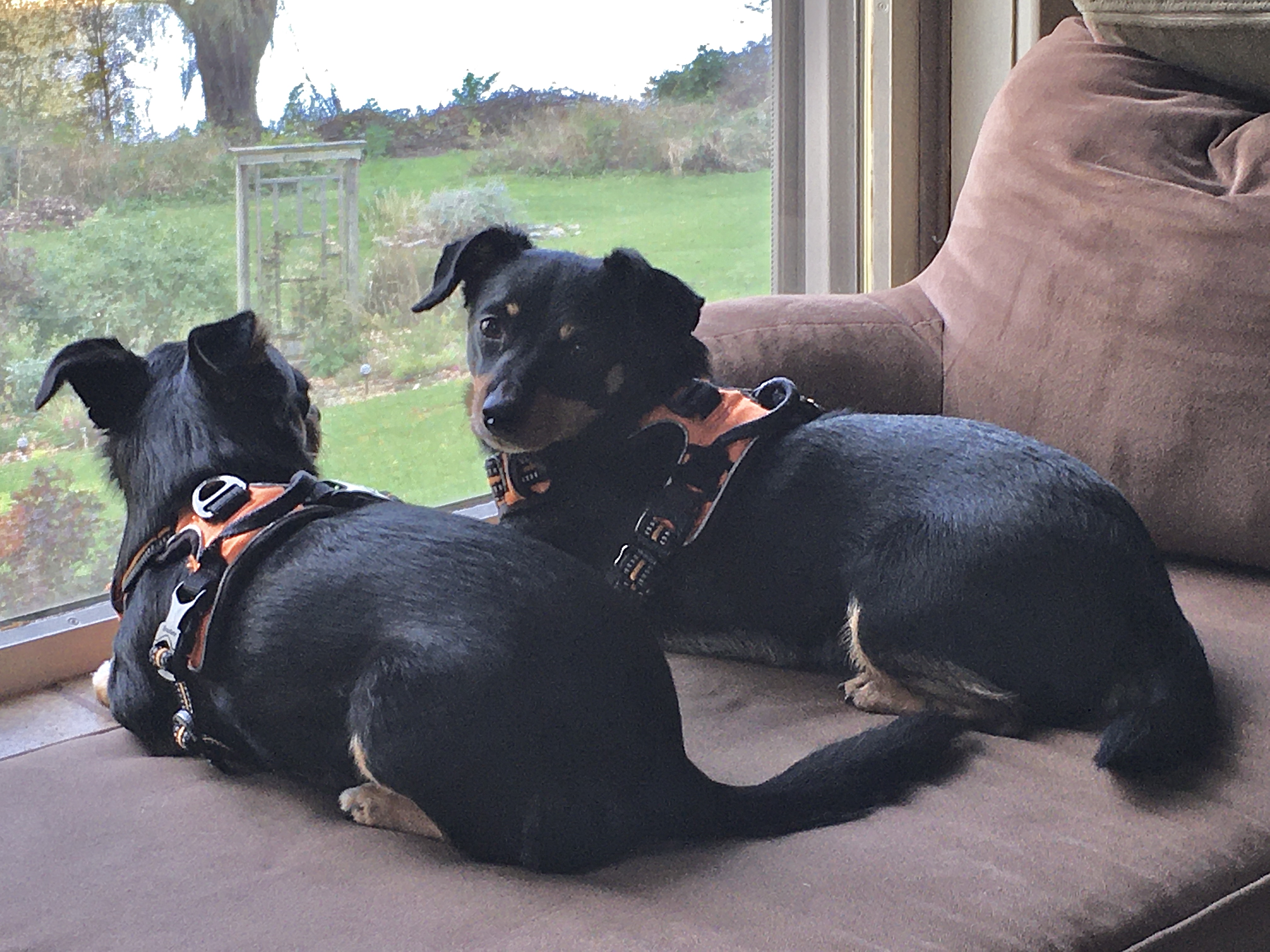 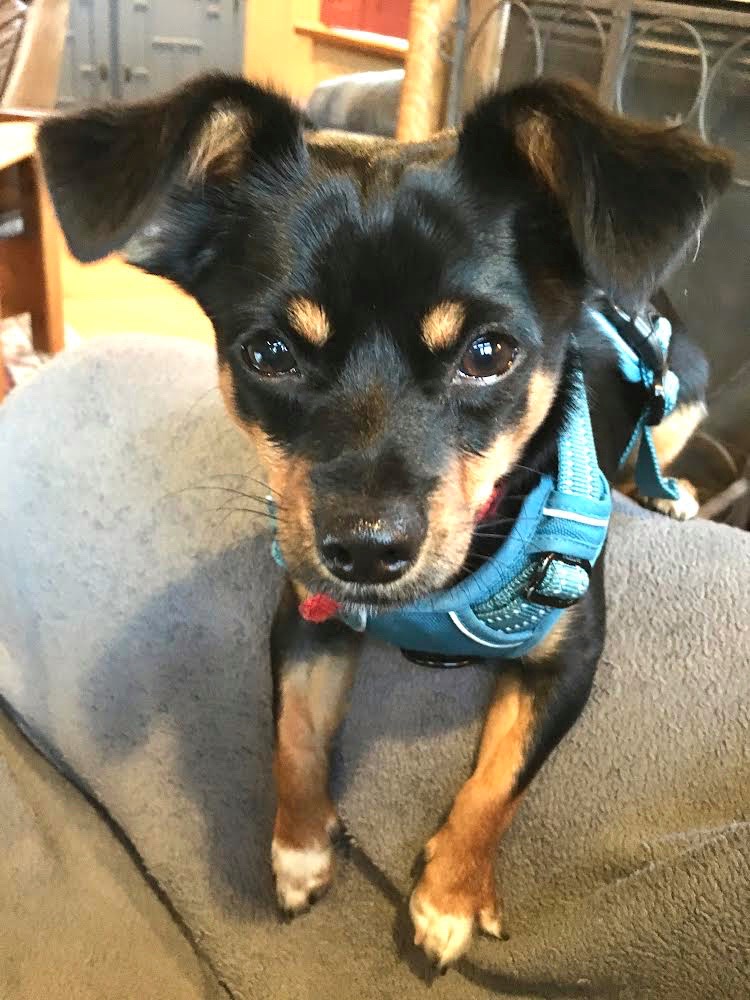 I spoke of Teagan’s mastery of our humans’ unconscious workings. Here is an example: Mother was taught by nuns from childhood through university and, although she loved them and has had many nun friends as an adult, there is a deep “nun archetype” of authority that unconsciously snaps mother into unquestioning obedience. Note how brilliantly Sister Mary Teagan has worked this to her, and our, advantage. Many a laugh–and automatic treat–have resulted. I think it is the suggestion of the veil, but also the stern gaze that makes Teagan the unparalleled artist in this field.

Teagan has also trained mother through an entire “evening sequence” that we all admire greatly; indeed, we are left breathless at how smoothly it flows, perfectly cued and timed to occur nightly, without a hitch. At 7:00 precisely, mother is reading contentedly, when Teagan approaches and stands up on her rear paws to “sweetly” peek over the foot of the chaise. This causes mother–with no thought process evident at all, so automatically is she trained to respond–to open and spread a blanket in her lap. This is done exactly as Teagan has trained mother to do, for it must be just so, with a perfect pocket indented in the blanket for Teagan’s nestling pleasure. And once Teagan is settled, mother must cross and fold the blanket over and around her as endless practice has perfected, until–success!–Teagan is swaddled cozily in her banky for the evening.

We all watched with amazement as this complex training was accomplished over a series of months. Teagan used the withholding of kisses until rewards were earned; she employed her “nun gaze;” resurrected her puppyhood’s complete indifference (aha! a retreat to mother’s old fear of failing to be loved by Teagan!), and then inserted shrewdly-timed cuddles and “good girl” nudges to provide mother with gentle encouragement and guide her towards completing her arduous training. As you can see, if your training can be broken down into simple steps, oft and calmly repeated, judiciously rewarded, and firmly reinforced, then success will be yours. 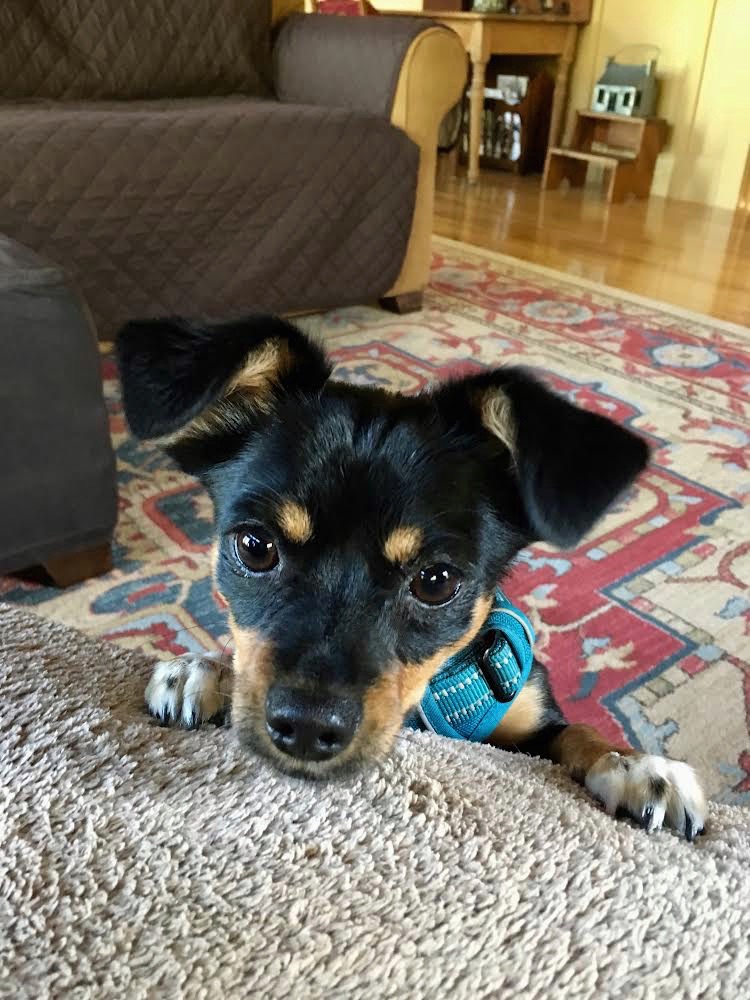 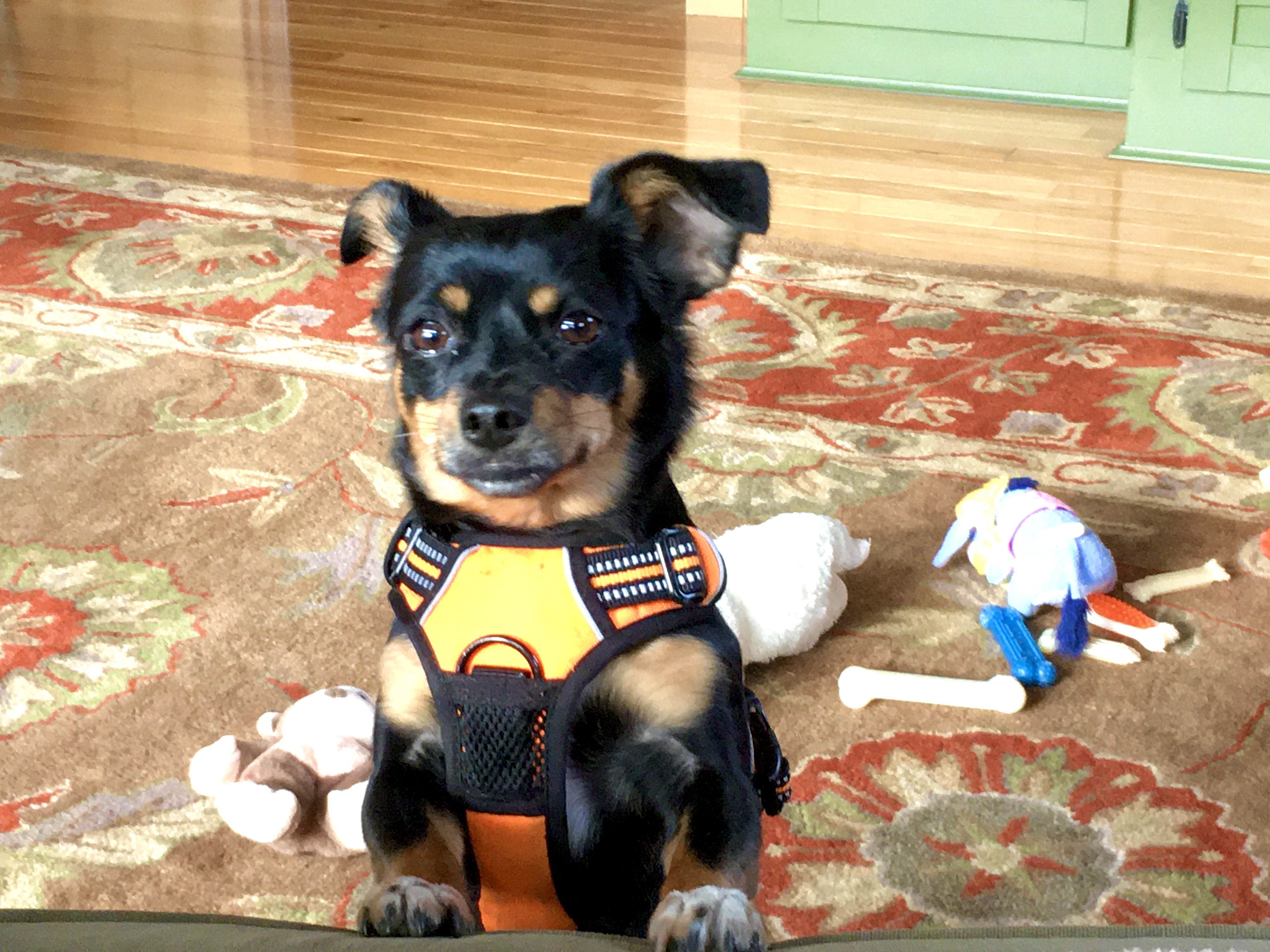 The boys, who are far less exacting, have nonetheless, trained father to accept their nightly presence as well. (I have learned that my Adorableness allows me to rest anywhere I like, though I have not trained our humans with the exactitude of Teagan, the Trailblazer.)

Although, we have a Recent Development that bears watching. Malarky has begun to leap onto mother’s lap at 6:45, thus edging Teagan out. He may also be attempting the nun-look and failing miserably. Mother, in her peaceful oblivious manner, allows them both to nestle with her, but we can all tell Teagan is plotting, and eagerly await her next move. Larky will likely not know what hit him. And so, we train the humans and vie for power in our pack: the life of canines everywhere.

Thus concludes the first chapter of my oeuvre on training your humans. There is so much more, of course, to explore and upon which to expound; for example, forming alliances: 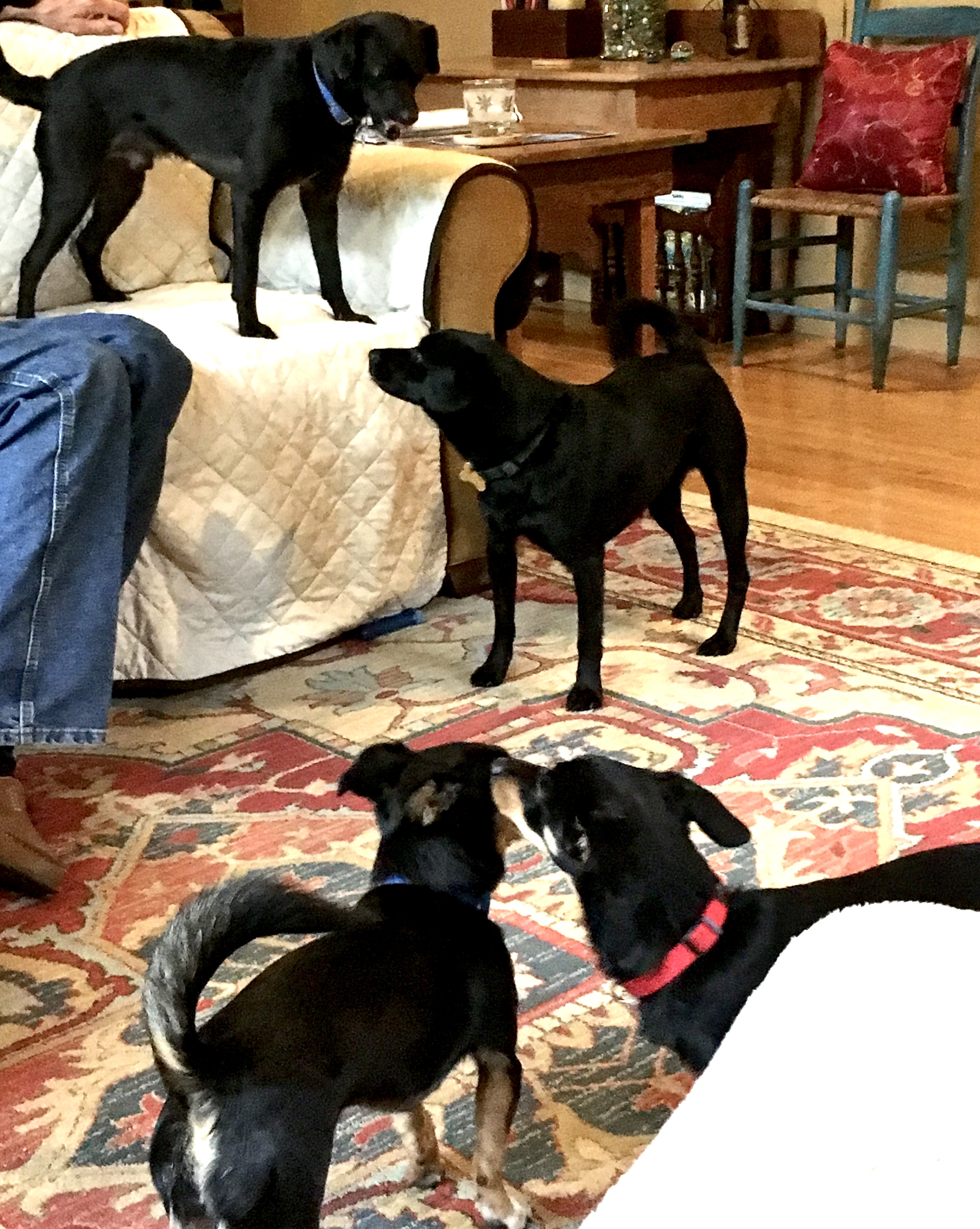 But these will have to wait for another day, as it is time to herd our mother and father out of doors for another walk. Their exercise is so vital, as is their intake of healthy food and water…our work is never done, but it is ever and deeply rewarding, our raison dêtre, as it were. I leave you with these two photos of our humans. Aren’t they darling? Simple, even insipid, but ours, and we love them. We’ll keep training them and protecting them; it’s a good life and they’re doing well. After all…just look at these sweet pictures! You can see how earnestly they believe that they have chosen to feed us. Success!

A very Happy Valentine’s Day to all!

11 thoughts on “The Training and Management of Humans (an excerpt)”