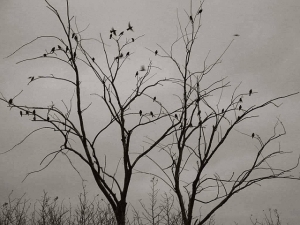 The past two weeks as I’ve walked the trail, I’ve noticed the blackbirds and robins have returned to their spring songs, or rather, the young birds are rehearsing these songs under the tutelage of their elders before the flocks leave for the winter. When they return next spring, the juveniles who survive the winter will be mature, ready to find mates and build nests. The songs they’re practicing now will be naturally and completely their own, and passed on to their young in time.

My father was a storyteller. He created stories and songs; he told stories well; he earned a degree in journalism; and he knew his way around the world of language. My mother was a grand storyteller as well, as were all the members of her family, with whom we shared wonderful vacations and visits throughout my life.

My father’s childhood was rarely discussed; his family unknown except for allusions to sadness and neglect, the early death of his father; a distant, emotionally-remote mother; and a younger sister who chose to stay out of touch. The absence of storytelling surrounding his childhood was felt in my own.

Storytelling was a characteristic that became more marked after a massive stroke robbed or altered other charming personality traits that made my father uniquely mine, and sadly exacerbated less-endearing traits, like flashes of anger, that would unexpectedly explode and wound, however understanding one could be about the after-effects of stroke.

For about 15 years following my father’s stroke, my mother’s continuous and patient care allowed him to pursue those activities that could still give him joy: to read, to write, and, especially, to tell his stories.

I learned that despite poverty and exquisitely inadequate parents, enough relatives and friends helped my father salvage a childhood that became the source for most of his post-stroke stories. Depression-era, small-town Northern Minnesota life was humble, but full of adventures, innocence, and the freedom to roam the countryside, fish in the lake, and create plenty of ways to enjoy the long winters. This time of my father’s life, his childhood and young adulthood, became vivid for him following his stroke, and his need to share these stories became crucial to the quality of life he could yet enjoy.

I worked as a teacher during those years and was able to visit my parents during the school-year breaks. Initially, I tired of hearing the repeated stories, however humorous. But eventually, as the years passed, I began to observe my mother’s ways of listening and facilitating my father’s storytelling, ways she had learned to widen their boundaries, having heard the same stories countless times. Her gracious listening encouraged my father to explore the meaning of his stories, to add nuance, to detour from the escape of humor into the reality that more authentic emotions afforded. He already, inherently, was graced with the ability to infuse his stories with wit and charm.

I began to listen more deeply and ask questions that encouraged my father to sharpen his descriptions, to offer subtext, and explore themes. The stories began to come alive for me; I knew these people, this place, this life.

Now, as I hear the autumn birdsong and reflect on the wisdom of elders, I know that these were my stories as well. They helped to heal my father’s spirit and they opened a door to his life that had long been closed to me.

In the autumn of his life, my father was teaching me the notes I needed to integrate his life into my song. And now his story has become a treasured part of mine.